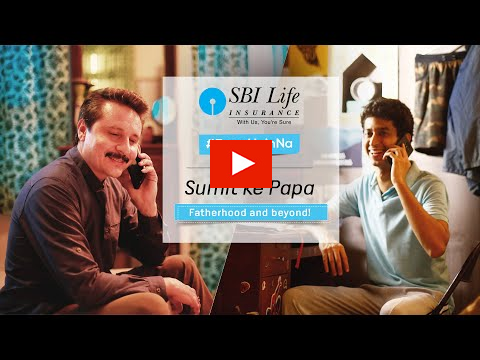 
The pandemic has redefined our perspective on the responsibilities of fathers at home and how they adjust to a new way of life while simultaneously keeping the promise to protect their families. Recognizing the greater role played by fathers to family as well as society this Father’s Day, SBI Life Insurance has released a heartwarming digital film. It portrays the emotional and protective side of a father to his evolving responsibilities in the midst of the pandemic.

Conceptualized by WAT Consult, the digital film features a bond between a father and a young boy with an emotional touch at the end. While talking to the father, the young boy tries to cover up his problems to deal with the challenges brought on by the pandemic-induced lockdown. But thanks to the instinct of a father, he understands the troubles of the young boy and offers him all the help he can. The warmth displayed in their conversation makes it easy to believe that this is a father-son relationship. However, towards the end of the film, it is revealed that the man is not the boy’s biological father. In fact, the young boy is the child of his housekeeper, who has looked after his family for years.

Ravindra Sharma, Head of Brand, Corporate Communications and CSR, SBI Life, said: “As men constantly take on household responsibilities as part of their lives, the pandemic and the bottlenecks have placed emphasis on the less spoken role of fathers. , assuming responsibilities beyond family duties. Our Father’s Day movie, in essence, is an idea that is widely seen in Indian households today, where families offer unconditional help to people. SBI Life’s #PapaHainNa campaign is a tip of the hat to fathers who are actively contributing to societal change.

The film shows how, during the pandemic, fathers not only break stereotypes by participating in household chores, but also keep their promise to protect their immediate and extended families.

Heeru Dingra, CEO of WATConsult, said: “SBI Life’s digital property, #PapaHainNa, has been celebrating the spirit of a father’s love since 2015. On this Father’s Day, the brand continues to uphold tradition with another heartwarming campaign focused on a father’s commitment to protect. Fathers are rightly called superheroes because they inevitably save the day. Therefore, brands have widely exploited this beautiful concept of father-child bond. However, this campaign is so much more. This will bound to leave our viewers speechless, thanks to the unexpected twist. “

Pennexx had its second consecutive quarter of profitability and an exceptional…