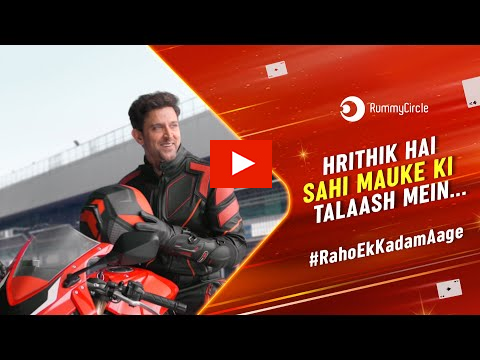 RummyCircle has launched two new commercials as part of the brand’s “Raho Ek Kadam Aage” campaign. In its third edition, the popular campaign is based on the idea of ​​”Chaar Kadam Aage Socho Aur Raho Ek Kadam Aage” and emphasizes the foresight, skill and intelligence to stay ahead in life as well than in the game of Rummy. The campaign features Bollywood superstar Hrithik Roshan, who was named RummyCircle’s brand ambassador earlier this year.

Commenting on the campaign, Avik Das Kanungo, Associate VP – Brand Strategy and Marketing, Games24x7 said, “We are delighted to launch the third edition of our popular ‘Raho Ek Kadam Aage’ campaign. This time we take a step ahead of the campaign thinking and core messaging by saying “Chaar Kadam Aage Socho Aur Raho Ek Kadam Aage” with the films narrative highlighting the philosophy of foresight, quick thinking and accurate assessment of your opponent’s moves. . We are confident that the campaign will strike a chord with our audience and increase their engagement with the platform.”

Speaking about his association with RummyCircle, Hrithik Roshan said, “A game like Rummy is a great cause besides being entertained, it also helps sharpen insight, improve quick thinking as it requires the ability to plan ahead. advance to give your best performance. These are great life skills that can be cultivated even while having fun. RummyCircle brilliantly weaves an experience for Indian players that can sharpen problem solving and provide mental agility. We let’s start the third campaign with them together and it’s been a fantastic partnership so far.”

Commercials shot as part of the third edition of the #RahoEkKadamAage campaign show Hrithik planning several steps in advance and strategically defining his moves in order to successfully overcome obstacles in his path. The third stage of the campaign was designed by DDB Mudra. RummyCircle’s cross-media campaigns will span multiple platforms including TV, digital, OOH and social media platforms.

RummyCircle has partnered with several renowned personalities since its launch in 2009 to strengthen its engagement with millions of gaming enthusiasts in India. It offers players the opportunity to test their abilities and skills through free tournaments and exciting cash prizes. Due to its excellent UI/UX, custom player journeys, and state-of-the-art technology, RummyCircle is the favorite platform for players looking for excitement and fun.