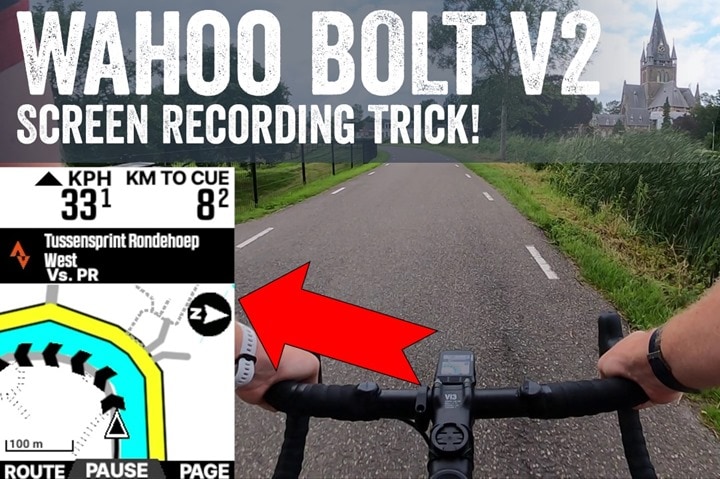 How to record a screen on the Wahoo BOLT V2

Here’s a quick (and totally awesome) tip for Wahoo BOLT V2 users. You can now record onscreen what your Wahoo ELEMNT BOLT V2 is doing, which is useful for about two of us: Me and GPLAMA. Actually three if we include DesFit. Four to five if we include Matt LeGrand and Tariq, and oh heck – any other YouTuber. Even TrainerRoad and their series of race analysis videos.

But in reality, it can also be very useful for product support. If someone has a really weird bug that’s hard to reproduce, or even just does something weird and needs to explain it to Wahoo Support, there’s often no better way than recording a video. It’s just that it just takes the complexity of pointing a phone at it.

In fact, it is quite plausible that this was also rushed after all the issues I had on my BOLT V2 at launch allowing them to see what I see. And, since you’re probably curious there, things have been definitely better for the past week or so. Today’s ride was the first flawless ride without loss of sensor. So we get there. Later.

Oh, and it can happen to other Wahoo ELEMNT series units, but the BOLT V2 has a few more APIs so they see if they can pull it off on other units as well. What would it be like to also see it on the Wahoo ELEMNT RIVAL watch?

Setting it up is silly easy. However, you need a computer. Basically we just create a folder on the BOLT2 and then it knows how to start capturing files. Maybe down the road there will be a secret menu option or something, but for now that’s perfect (and somewhat reminiscent of the Varia radar trick that lets you change car icons to chickens or other).

In any case, here are the steps:

1) Connect your Wahoo BOLT V2 to a computer

On a Mac, you will first need to grab the Android File Transfer app, like many devices these days, which is needed for your Mac to see it.

3) Create a folder called Capture on the BOLT:

4) now unplug your BOLT and turn it off, then turn it back on.

5) Go to the BOLT menu and scroll to the bottom, and you will see ‘Debug menu’ to open (or, if it’s not in a beta group, it looks like it’ll just show up as an option at the bottom, without opening a Debug menu), then you’ll see Advanced user: screen recording, with a rocker for OFF or ON (the default is OFF). Simply put it to ON, choosing the start option: 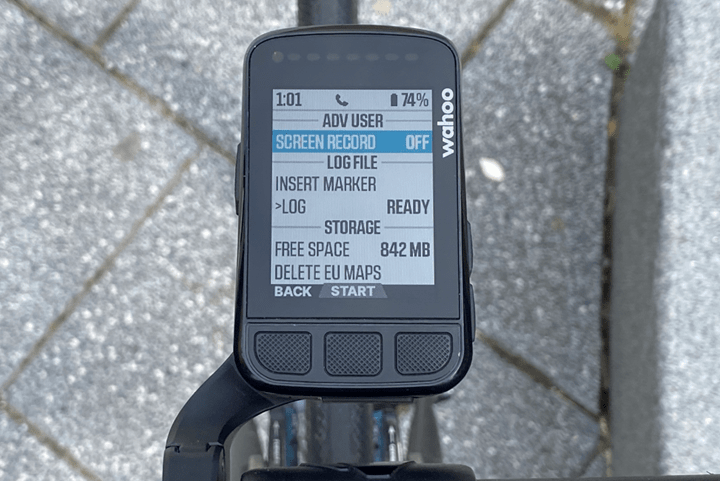 6) At this point it is recording. It’s that simple. The recording rate is around 75MB / hour, so quite small. My BOLT V2 with full EU / US / Australia maps has 865MB of space left which would make 13 hours of recording time, or even more if I vote Australia off the island as it looks like I won’t be able to not travel there until 2028 or something like that. Or any other country I don’t plan to travel to.

You can validate that it is recording (or stop it) by returning to this menu option, and you will see the current recording time, as well as the option to stop it: 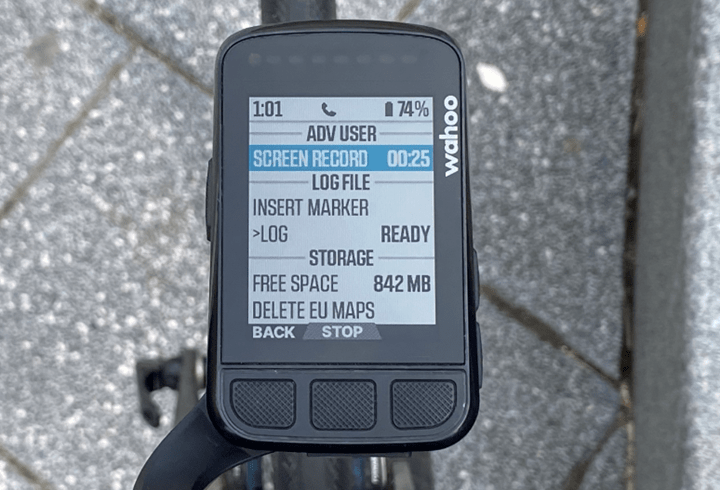 7) Finally, to recover the file (after stopping it) you will plug it back into your computer and in the capture folder you will see the MP4 video file:

The file is rendered at 230w by 320h, at a whopping 1.95fps. Obviously, this looks weak by 4K / 60FPS standards, but in reality it doesn’t matter. You’re not blowing this up in fullscreen (or, I’m guessing you’re not anyway).

In my case, for my videos, I’m going to record footage on a GoPro or whatever, and then overlay them together: 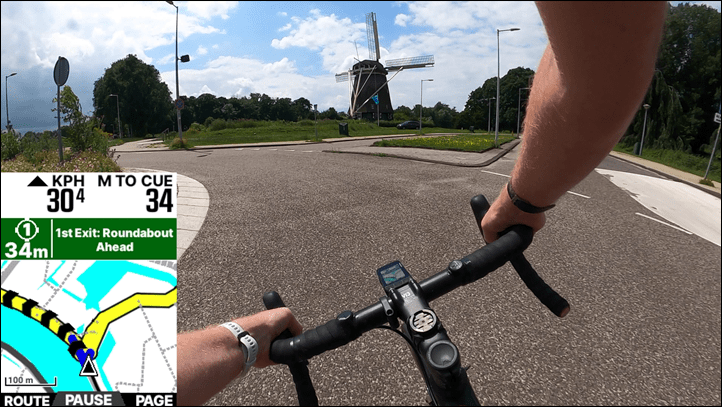 Some really quick pro tips for doing this, which apply to both Wahoo and Hammerhead, from someone who had to piece together those videos:

1) Don’t shoot a lot of clips. It is MUCH better to shoot really long clips than 12 short one-minute clips. The reason? You need to merge them, and since the ones on the bike computer don’t include audio to sync, you’ll have to do it manually.

2) To make your life there easier, once your GoPro is recording (and BOLT recording) audibly count what’s on screen. So either on your trip timer (how long you’ve been driving) or the on-screen recording timer (in the settings menu), count 3-5 seconds. The reason? You can use it to match the timers.

3) Next, to get a very precise match between screen recording and video, hold the BOLT in front of the GoPro for a while and press some buttons to get the exact images. This is more difficult to do when the BOLT is away from the GoPro, so place it about a pound away. 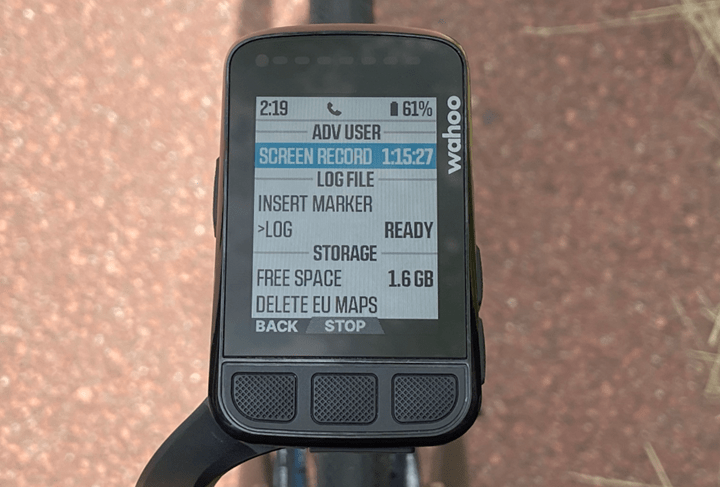 Finally, funny, the background is that GPLAMA and I spoke to one of Wahoo’s original engineers, Murray, about a month ago. You might remember him from the Tour Down Under Bikes & Beer panel we did, where he dropped all kinds of neat treats behind the scenes. Anyway, I was pointing out that one of my favorite features of the Hammerhead Karoo series is the ability to capture / record on screen (since it’s just an Android device). This allows me to make much better videos, and even photos for the review, since I am not dealing with the glare of the photo equipment. And most notably, for the past 2 years here in the Netherlands, it is illegal to hold a camera / phone in your hand while riding a bicycle. So I had to create all kinds of creative platforms to overcome this, none of which gave great video results.

For Murray, the same restriction actually came into effect recently in his region in Australia, adding yet another reason to incorporate it. kinds. Maybe he’ll grow up to have his own menu option someday.

Speaking of maybe; we may see other companies add that as well. I casually noticed that in a YouTuber’s sponsored video (by Garmin) the other day, they had created real watch renderings of what she had in terms of training on her watch. I don’t know if it was done automatically, or if she gave them a list of workouts after the fact, and they just prepared them and sent them back. But I don’t know of any way to do it today on Garmin devices.

So as reviews and content continue to slowly move to YouTube (for better or worse), it’s increasingly important to be able to get / display exactly what’s on screen, especially the ones. small screens during training. And also, it is equally useful for the support / helpdesk / engineers to fix weird issues.

With that, thanks for reading!

Did you find this message useful? Support the site!

At the end of the day, I’m an athlete just like you looking for as much detail as possible on a new purchase. These items usually take a long time to put together, so if you are purchasing the Wahoo ELEMNT BOLT V2 / 2021 or any other accessory, consider using the affiliate links below! As an Amazon Associate, I earn Qualifying Purchases. It doesn’t cost you anything extra, but your purchases go a long way in supporting this website. Even more, if you use Backcountry.com or Competitive Cyclist with a promo code DCRAINMAKER, new users save 15% on applicable products! 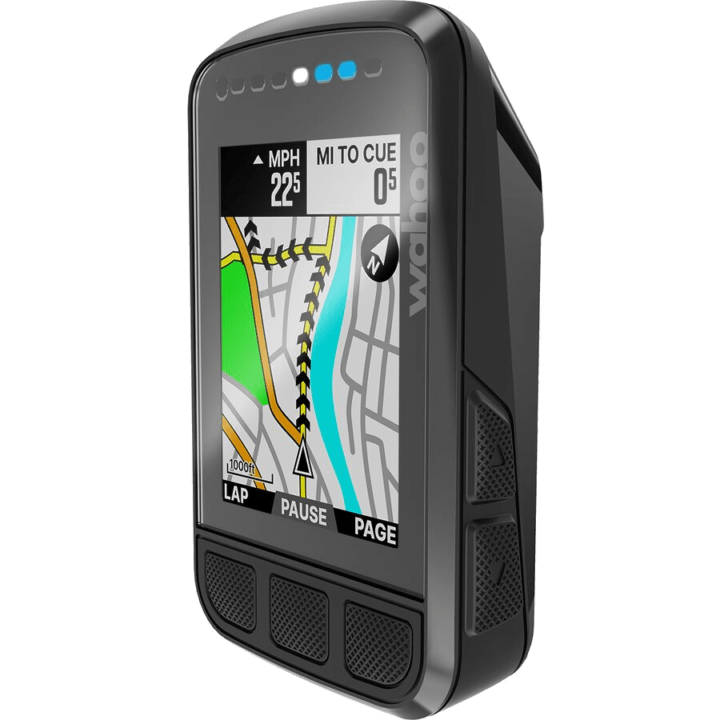 And of course, you can still register to become a DCR supporter! It gives you an ad-free DCR, access to the DCR Quarantine Corner video series packed with behind-the-scenes information … and it makes you awesome too. And it’s about being awesome!