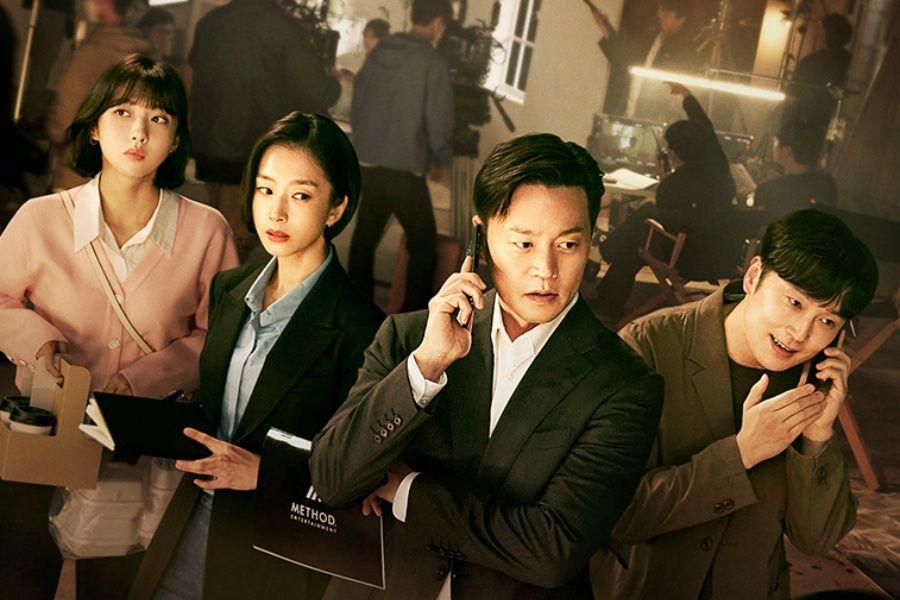 A new poster for the upcoming drama “Surviving as a Celebrity Manager” (literal translation) has been released!

Starring Lee Seo Jin, Kwak Sun Young, Seo Hyun Woo and Joo Hyun Young, “Surviving as a Celebrity Manager” is a remake of the hit French series “Call My Agent!” The original series spans four seasons and captures the fierce struggles of top stars and their managers in a realistic and witty way.

The tvN remake will develop episodes tailored to situations in Korea while including the highlights and interesting points of the original work. The story will show how professional managers working with Korea’s biggest stars are inevitably amateurs in their own lives as they navigate between work, love and ambition.

The new poster shows four of the managers who work at Method Entertainment looking extremely busy as some kind of filming unfolds behind them. There’s Ma Tae Oh (Lee Seo Jin), Cheon Jae In (Kwak Sun Young), Kim Joong Don (Seo Hyun Woo), and So Hyun Joo (Joo Hyun Young). The phrase “I’ll do anything!” As long as my actor is the star” boldly imposes itself above all the action, encapsulating the mindset of those hard-working managers who are willing to give their all for their jobs.

Ma Tae Oh, the general manager of Method Entertainment, stands confidently and with a dignity that can only come from being the “control tower” of the company’s operations. Then there is team leader Cheon Jae In, who is a professional when it comes to detecting fine details. She looks around with a sharp glint in her eye as she makes sure all is well on set.

The other team leader, Kim Joong Don, speaks on the phone with a friendly smile, giving the appearance of a soft-hearted person. Finally, there’s new manager So Hyun Joo, who can be seen carrying a transporter full of coffee for the team as she looks around with an expression that’s a mixture of bewilderment, curiosity and of admiration.

As these four people find themselves in the midst of such chaos, the urge to know exactly what kind of life these people live and what exactly their stories are becomes even stronger.

The first episode of tvN’s “Surviving as a Celebrity Manager” will air on November 11 at 10:30 p.m. KST. Watch a teaser here!

In the meantime, watch Lee Seo Jin in “Times” on Viki!